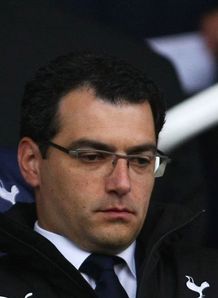 The mastermind behind the resurgence of Spurs and St. Etienne?
There are those who would describe Liverpool's recently recruited 'Director of Football Strategy' as a snake. In a press conference last week, Harry Redknapp reacted angrily to the suggestion that Comolli deserves credit for assembling the current Tottenham squad. Arsène Wenger was similarly withering in his assessment of Comolli's influence on Arsenal's transfer policy: Comolli has been quick to talk-up his former role as a European scout for the Gunners. On November 9th 2008, Comolli became 'Sporting Director' at St. Etienne and was instrumental in the club's improved showing earlier this season. Ultimately though, he may weaken St. Etienne - and Ligue 1 - by facilitating the transfers of, respectively, Blaise Matuidi and Lille's centre-back Adil Rami to Liverpool.

It's worth noting that two managers were sacked during Comolli's second spell at St. Etienne, which lasted two years. His work at Tottenham coincided with the brief, unhappy tenure of Juande Ramos. Based on that evidence, Comolli doesn't engender stability.

In his capacity under - or rather alongside - Roy Hodgson, will Comolli prove to be a snake, an asset or simply ineffectual? Time will tell. Nonetheless, it's hard to overlook the symbolism of Liverpool's interest in a player named Eden Hazard, a teammate of Rami at Lille. Hodgson is clearly tempted to bring Hazard (undeniably, a tasty prospect) to Liverpool, but the manager must beware. Acquiescence to Comolli could lead to a fall from grace.