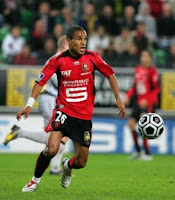 Sylvain Marveaux was a guest of Liverpool at their match against Wolves on December 29th. Remarkably, he wasn't put off. An attacking midfielder who normally plays on the left-wing for Rennes, Marveaux bagged an impressive ten goals last season. Although that form took him to the periphery of Raymond Domenech's World Cup Squad, he wasn't selected and has so far been overlooked by new boss Laurent Blanc. Marveaux might not be fans' dream signing, but his pace and creativity would be a definite asset to the current Liverpool side.